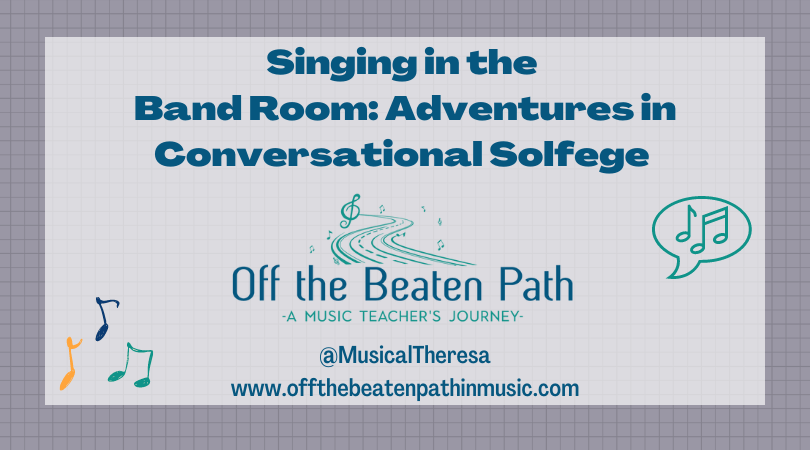 Most band directors would agree that singing is an important part of instrumental music. Most band directors would also agree that this is easier said than done! It wasn’t until I began playing in collegiate ensembles that singing seemed like a natural (and effective) part of the band rehearsal. As a teacher, when asking my students to sing during rehearsal I often felt like something was missing. That we weren’t quite doing it right. The lab bands at The Midwest Clinic made it look easy! For me, it was anything but easy.

I have always been the type of person who looks for better ways to do things, whether it has to do with health, my home, or my teaching. While there are some teaching activities I repeat year after year, others I am not afraid to change if I feel like something else might be more effective. My adventures in conversational solfege fit perfectly into that category!

…wouldn’t it make sense to teach the students using concepts and information they already knew?

Last year I began accompanying the 4th- and 5th-grade chorus rehearsals. Chorus is required for all 4th- and 5th-grade students in my building – it meets weekly during the school day. During rehearsal I observed the students singing many songs (confidently) using do-re-mi, decoding both rhythmic and melodic patterns, and creating their own similar patterns. It was quite impressive! It made me think, if the students were already extremely familiar with do-re-mi and numerous songs containing those pitches, and I was attempting to teach beginning instrumentalists these same pitches, wouldn’t it make sense to teach the students using concepts and information they already knew?

After asking my vocal music colleagues many questions about what they were doing, I experimented with this new method. It was rocky at times, but also quite rewarding! So much that I took the Conversational Solfege Certification course this past summer. The instructor, Dr. Missy Strong, was fabulous. The course was hugely beneficial in explaining the philosophy behind Conversational Solfege and the process for implementation.

1. Any success I have had with this method was only possible due to the solid foundation already laid by my vocal/general music colleagues! The students had already participated in several years of First Steps and Conversational Solfege training in vocal music classes.

2. This is an extremely simplified explanation of Conversational Solfege. To learn more, I highly recommend checking out their materials online and joining the Feierabend Fundamentals Facebook group.

What is Conversational Solfege?

Conversational Solfege is based on the teachings of Dr. John Feierabend. Essentially, it encourages teaching music the same way we learn language – aurally first. Students begin by echoing what they hear, both patterns and songs. They only learn to read when they are comfortable singing independently and decoding the concepts. (When decoding, the teacher performs a pattern or song on a neutral syllable. The students respond by singing it on the correct rhythm or solfege syllables.)

What does this look like in an instrumental music class? It starts with singing! We began the year by first echoing and decoding rhythm patterns on a single pitch. Then we moved to playing poems on a single pitch. Students would speak the poem, decode the poem (speak with rhythm syllables), and finally play it on a specified pitch. The poem could then be played on a variety of pitches and pitch combinations. Sometimes I would have the group play on Do and students could have the option to add Mi as they wished. It became an instant (simple) creative opportunity! The next step in my classes was to add melodic patterns using do-re-mi. This followed the same pattern of having students echo and then decode the patterns. Finally, that transferred to playing songs! The students were so excited to play the songs they were already familiar with singing in vocal music class. I should add, students learn both pitch names and solfege names for their all of their notes.

One of the biggest reasons I like this method is the musicality. Students go from singing a song tunefully to playing the song the same way. No longer do I have beginning students playing a song one. note. at. a. time – as beginners are so known for doing. They play actual phrases and articulate notes. It’s not because I’ve explicitly taught those concepts, but because it feels natural to them. By teaching everything aurally, we’ve removed the barrier of reading and students can find success playing songs much sooner. The students also have the tools to figure out additional songs from vocal music class on their own, and many do! I love it when the students come to lessons excited to show me the next song they figured out how to play. It’s rewarding for everyone.

By now I’m sure you are wondering about reading music. Students learn to read music, just not immediately. Once the students can decode patterns and songs (both familiar and unfamiliar) they are ready to read music containing the same information. When you think about how we learn a language, this makes perfect sense! First, we learn to mimic sound; next, we learn to string those sounds together to form words and sentences, and then we learn how to read. This is the step my classes are on right now melodically, beginning to read the music (we have been reading rhythm patterns for several weeks). So far it’s going well. Many students have made connections between what the notes look like on the staff and how they sound when played, which is fantastic.

I cannot pretend to have this all figured out, or even to know exactly how the next few months will play out, but I do know I’m happy with the results so far and the students seem to be enjoying themselves. For now, that’s enough.

If you are an instrumental music teacher, I encourage you to look into this method. It has made me think about how I introduce musical skills and concepts to beginning instrumentalists. I believe so far my students are playing more musically than when I would start with page one in the method book and move from there. In addition, this is a very empowering method to use when teaching students! I find it lends itself nicely to students creating and being able to own the learning process as they become more musically literate. I will continue to write more about this adventure as the year progresses; it has been an eye-opening and enjoyable process!

Check out the follow-up to this blog post: Conversational Solfege – But Can They Read Music?

**Some links in this post are affiliate links, which means if you click on the link and purchase the item, I receive a small commission at no extra cost to you. This helps offset the costs of hosting this content! 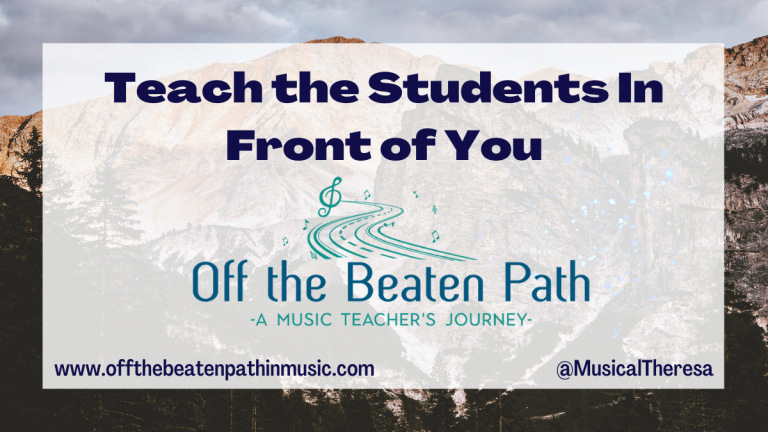 I’ve heard many people lamenting recently about students musicians who are weak players, behind, or not performing up to expectations. I’m sure this is true in the eyes of the educator, but there are several things we must put into perspective. The last two years have been something else. No one teaching has ever experienced…

It’s hard to believe we are almost two weeks into 2020! The past year has been a whirlwind. There were several awesome professional opportunities, including a new job, my experience at the Google Innovator Academy and two exciting projects that will be released in 2020. There were also some challenging personal events that led to…

Now that I am entering my third year as a Virginia resident and teacher I figured it was time to finally attend VMEA! To ensure it happened, I submitted three session proposals last spring. Two were accepted, which was excellent – attending the conference was meant to be. (Feel free to check out the presentations here.)…

It should come as no surprise; I am someone who loves to read. Even as a kid I would often get in trouble for reading well past bed-time. Now I usually have more than one book in progress at a time, especially since I also discovered the world of audiobooks! I try to read a…

It starts with a small shift. Something you can implement tomorrow.

As musicians, we’ve all been there. It’s the week before a performance and we wonder, am I really ready for this? Ready to get in front of an audience? Do I know the music well enough? Did I prepare everything thoroughly? We add a whole other layer to this when we ask the same questions…