The first performance for beginning instrumentalists is a topic frequently debated. Some believe it should take place as soon as possible, in as little as eight weeks, while others think beginners should not perform until the end of the school year when the group is more “polished.” I can see the rationale in both approaches, but I don’t think it’s as simple as one being better than the other. Often it depends on the structure of the program. Regardless of these details, the biggest thing to consider is the purpose of the performance. For me, the goal of the first performance is to give beginning instrumentalists the opportunity to share what they have been working on in a positive environment and for the parents to gain a better understanding of what we do in class and the (potentially strange) noises emerging from their child’s room during practice sessions!

I usually structure the Informance like an open rehearsal. The event consists of demonstrations of everything we would do during a typical band or orchestra rehearsal with the addition of an audience and applause! The band would demonstrate breathing exercises, long tones, rhythm pattern echoing, 5-note scale exercises, and some basic songs (rote or from a method book) that we have been practicing. The orchestra would do similar things but with the addition of bowing exercises. Many times I have also introduced a new concept or exercise during the Informance, merely to show parents the process we go through to learn something new. Between each demonstration, I would explain to the parents what we were doing and why. I find the “why” to be very valuable, especially for parents who never played an instrument themselves. The entire event is very positive for the students.

Last year the beginning band and orchestra Informance was scheduled as part of the Winter Concert with the Chorus, including an assembly for the school and an evening performance for parents. This was more formal than I typically would prefer. So, instead of structuring it like an open rehearsal, I turned it into a story: “Adventures in Beginning Band” and “Once Upon an Orchestra.” We demonstrated all the same concepts, but students narrated a story throughout.

“At the beginning of the school year, 38 students chose to embark on an adventure – an adventure in Beginning Band! Our goal was to perform at the winter concert, but in order to achieve it we had several challenges to face.”

It was a hit! The parents enjoyed it, and the students had a confident first performance. Since my administration is particular about what concert programs look like, I also came up with cute song “titles” such as, “Do I Hear an Echo?” and “DA Dances” to go along with it. It was a great success.

My goal this year is to make this Informance more student-centered.  I know that sounds challenging in an ensemble setting (welcome to my world!), but I do believe it’s possible. I plan to ask the students what they would like to share; which songs, exercises, and activities. The students will also be encouraged to write the narrative introducing each part of the Informance, which will not only be informative for the me as well! It will be interesting to hear what the students have to say about each exercise and activity we do.

I think it is important for beginning instrumentalists to perform and share their music-making early on. I don’t want students to wait until spring for this to take place. By having an Informance instead of a concert, I don’t have to change any of my curriculum goals or worry about perfecting the three pieces of concert music. I can focus on teaching proper technique and musicianship the way I would if there were no concert. The students get the benefit of performing in a low-stress situation and the parents get a sneak-peek into the music room. Everyone wins!

Planning With Not For: Involving Students in Concert Preparations

Enjoy what you have just read? Please consider subscribing to my blog!

Each December I like to look back at the blog to reflect on the year. Which posts were the most read? When was I most consistent in publishing? Were there any noticeable themes? Given the events of the year, it’s no surprise that a big focus was technology and almost all blog posts incorporated that…

Music in Our Schools Month (MIOSM®) is a great time for educators to showcase the fantastic things happening within their music programs. Throughout March, music departments all over the country put extra effort into making music front and center in their districts. This year I’m going to ask you to take that one step further….

Now that the year is over I have been trying to analyze how things went and begin plans for next year. I had several goals, as there were many new things I wanted to try. Personalized learning was at the center of everything, and I wrote about it here several times. If you haven’t read my…

Many music teachers look back at their own school music experience and have fond memories of being a student leader. They may have been a section leader, a drum major, or a concertmaster. Typically, leadership roles are given to the most experienced musicians, and it’s an honor to hold the title. While these positions are… 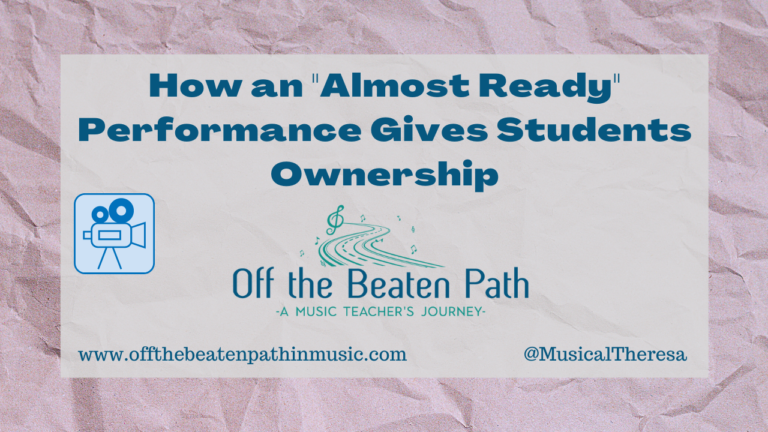 As musicians, we’ve all been there. It’s the week before a performance and we wonder, am I really ready for this? Ready to get in front of an audience? Do I know the music well enough? Did I prepare everything thoroughly? We add a whole other layer to this when we ask the same questions…