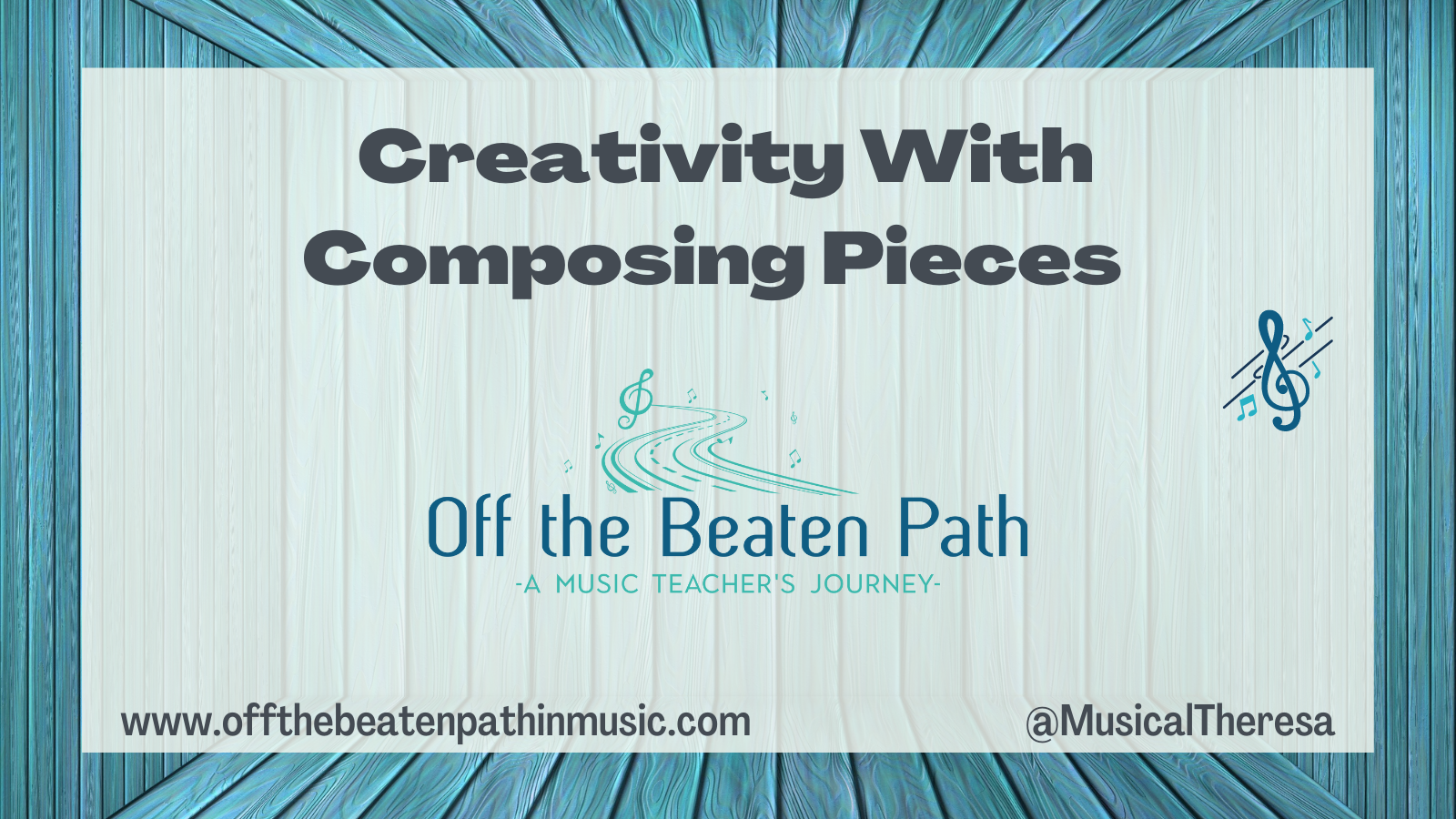 This was post was originally published in July 2021, but has been updated now in September 2022. As the new school year is about to start, remember how important it is to include students in the creative process. Even though my project was completed during hybrid learning, the concepts can definitely transfer now that we’re back to in-person learning.

At the beginning of the 2020-2021 school year I knew regardless of the teaching modality – virtual, hybrid, or some combination of the two – I wanted to expose my students to a variety of diverse music and composers. I also knew that incorporating student creativity was very important. After some research, I found Jodie Blackshaw’s piece, 13 Moons, which fit both categories perfectly.

13 Moons: Four Composing Pieces for Wind Bands of All Ages was written by Jodie Blackshaw in 2017. In each of the four movements, North, East, West, and South, the composer provides a melody, accompaniment, and ostinato. She also provides tools for students to learn about various compositional techniques. From there, the ensemble determines how to perform the piece! Each performance of the piece is different, since the students are responsible for its arrangement.

In so many ways, this piece was a win; a female composer of a band piece where student creativity was the focus! However, my school was virtual for a large part of the year, and then when we returned to the classroom, we were not allowed to play band instruments. In the virtual environment, creating a concert band arrangement really was not achievable. So we adapted. While I’m sure this is not what Ms. Blackshaw had in mind, it provided a great experience for the students.

I chose to have my seventh and eighth-grade band students work on 13 Moons: East. We began by learning the melody, countermelody, and ostinato together on Zoom. The band had been playing music from a method book and other pieces similarly, so this was a familiar procedure. Next we learned about tone color. To achieve this on Zoom, I would play the melody and have students play along (while on mute), listening to what the two instruments sounded like together. Students had a variety of descriptive words to choose from, provided by Ms. Blackshaw, or could select their own word(s) to describe the tone color they heard. Then I had student volunteers take turns playing the melody while everyone else played on mute so we could listen for the tone color produced by the new instrument combinations. This exercise helped students listen to what various instrument combinations sounded like and create a vocabulary to describe what they heard.

After exploring tone color, we learned about solo and tutti, rounds, and layering. It was a similar procedure where one person would play, either myself or a student volunteer, and we would all listen for the results. Sometimes, when we were trying to layer in voices, we even used the camera feature in zoom. Students would start with their cameras off, and when it was their turn to layer into the melody, they would turn cameras on. It wasn’t perfect, but it was better than nothing.

The next step was to ensure students were comfortable with the technology we would use to create their arrangements. I had been using Noteflight Learn this year, and knew that with its collaborative features it would be the perfect tool for this project. The first thing I asked students to do was input the melody from 13 Moons: East into Noteflight. This required them to understand how to use the Noteflight editor and its various features. After inputting the melody, I had originally wanted students to record themselves playing the melody into Noteflight, but some of the student iPads weren’t cooperating, so we eliminated this step.

Finally, I shared the book, 13 Moons on Turtle’s Back, by Joseph Bruchac and Jonathan London, which was Ms. Blackshaw’s inspiration for this piece.

After all of this buildup, I introduced students to the final project: they would work with a small group to create their own arrangement of 13 Moons: East. Students had input into their groups, they completed a Google Form indicating two people they would like to work with, and two people they knew they didn’t work well with. Using that information, I created groups of three or four students.

Here were the expectations for the final product:

I provided groups with a Jamboard to begin their brainstorming, but otherwise, the project was in the student’s hands! Some groups went immediately to Noteflight to enter notation, while others collected ideas in their Jamboards, and others just talked in their breakout rooms. Each group had their own systems. Some groups assigned specific roles to each student and in other groups, all students worked together.

7th & 8th grade band students are working in groups to create their own arrangements of “13 Moons” by Jodie Blackshaw. It’s a composing piece, which means Ms Blackshaw provided the melody and accompaniment, and the students get to make all other musical decisions! pic.twitter.com/oWsxduDuUK

Over the next several class periods, watching the students work together, problem solve, and create music was awesome! About a week before the final projects were due, each group shared their work-in-progress with the class. This was a good opportunity for me to see which groups were struggling and which were in good shape. Using a Padlet, students gave each other feedback – one compliment and one piece of advice for each group.

When the projects were due, groups presented their final creations to the class. It was a celebration of hard work and creativity. Not every group had their project completed on time. Groups dealt with technical difficulties, along with challenges managing time and carrying out project ideas. One group kept working on their project after the “due” date because they wanted to see their ideas through to the end. But we discussed how that is part of the process. While we must be aware of deadlines and guidelines, creativity doesn’t always follow a strict timeline.

I am SO impressed by the work of the DHMS Wind Ensemble! In groups, students created their own arrangements of Jodie Blackshaw’s 13 Moons: East. Their creativity was inspiring ☺️#VirtualMusicClass pic.twitter.com/bTWpEn8oy6

Having never done a project like this, I wasn’t sure what the timeline would look like. Eventually, I gave students a date for the work-in-progress sharing and the final due date, but in the future I would include other milestone dates for students to work towards as well.

At the conclusion of the project, students completed a reflection form discussing their contribution to the project, what they enjoyed about the project, and what they would do differently next time. Many students indicated that their favorite part of the project was working with classmates to create something new. They loved the creativity, independence, and flexibility, and were impressed that they were all able to create something that sounded good. Several students mentioned in the future, they would work more on time management, spending less time brainstorming and more time creating. This is where additional due dates from me could have been helpful.

How To Complete a Similar Project

While there are many ways to do a project like this, I recommend checking out Jodie Blackshaw’s pieces first. She provides teachers with all the tools to bring creativity to your ensemble, and with four movements in the piece at varying level of difficulty, it provides the scaffolding necessary to help students find success.

On a smaller scale, find or create a melody and have students work through a similar process!

Interested in learning more about Jodie Blackshaw and her work? Check out Episode 32 of the Pass the Baton podcast: Creativity with a Student First Mindset.

Have you performed 13 Moons with your students? Or other creativity infused pieces? I’d love to hear about it! Please reach out and share.

August 2022: This blog post has gotten a much-needed update! Whether you are about to start the school year or a few weeks in, hopefully it will provide you with simple ways to empower your music students. It’s easy to fall into the trap of believing that you can only empower music students later in…

I’ve always enjoyed creating digital resources, and now, teaching remotely, it is even more important. While this post isn’t directly teaching related, hopefully it will be useful when creating things for your classes. The following four tools are ones that I can’t live without when it comes to designing digital media. In fact, I imagine…

Welcome to the first in a series of short posts about technology tools I have been using recently. This particular tool helps immensely with organization! Before winter break, I had the privilege of attending the Virginia Music Educator’s Association Conference and the Midwest Band and Orchestra Clinic. These are events I look forward to every… 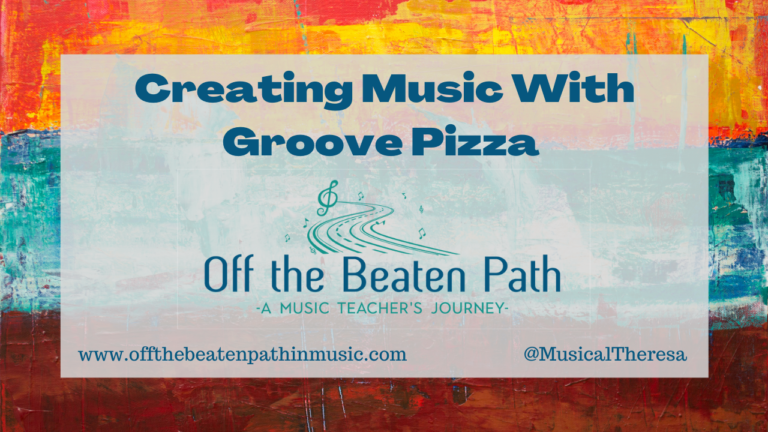 One of my favorite ways to use technology with students is to have them create music. Lucky for us, there are so many great options available. Today I’m going to share a tool I’ve been using for several years in my music classes. It’s free, accessible from any device, and fun! Groove Pizza Groove Pizza,…

Anyone who conducts multiple ensembles or prepares for multiple performances knows it can be challenging to keep track of every group. What was covered during rehearsal?  What sections need more work? When were run-throughs were executed? The list goes on. Personally, I teach four separate ensembles during the school week – 4th-grade band, 4th-grade orchestra,…

October 2021 – this post has gotten an update! Check out these Jamboard updates and some new ideas for how to use it in music classes. I see the irony that my last post was about understanding your WHY in the classroom prior to determining your WHAT, and today I am starting another series on…